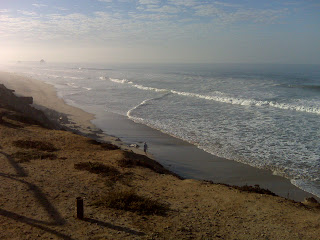 I'm home from work today sick with the flu...I'm on day 12 so am hopeful that any day now, I should begin to feel better instead of weak, groggy and blah!  So, I dropped my daughter off at school early this morning and decided that a short drive by the beach might make me feel a little better and I was right.  After days of blazing heat again in Southern California, we had a bit of a marine layer this morning that began to break up just as the sun was just coming up.  A broken layer of very fast moving clouds showed streaks of sun rays dashing to the ground and in between them bits of cerulean blue laced with a higher level of more stationary clouds.  Had I not been so sick, I'd have stopped at the beach and taken pictures but I realized I needed to save that for another time.  The ocean, first thing in the morning, is just more beautiful than one can imagine.  Perhaps its that coppery golden light dancing upon the water or the peaceful quiet of night broken by the light of the sun that just seems so magical.  I'm not sure but it does soothe a weary soul so very much.

I've had so many thoughts running through my head with time to think now that I am not focused on working myself to pure weakness and I've realized a lot lately about illusions, shattering them and picking up the sad pieces of self and letting them reform into a stronger, more aware and less critical being. Its funny that I stand accused of a great many things right now and I realized very quickly that I am not the only one who has been mired in illusion and it is those illusions that reminded me that I needed to stop focusing on the illusions others hold and instead bring into focus my own.  I've held many on certain topics and I've begun to understand why.  It'd be way too personal to go into detail so I plan to keep my own counsel in all but the high-level thought processes.  We hold illusions out of desire and we hold desire out of a perceived lack and if we are not careful, our creations will not bring forth the beauty we intended but the ugliness that needs our attention.  Its no easy thing to contemplate, I assure you.  We like to point out the ugliness in the world and the ugliness in others but it is the ugliness within us that brings that into focus.  If you do not shift, change and open yourself up to the truth, you're really contributing to more of the problem than the solution.  The solution is to pull back on the desire to point out the weaknesses in others and instead seek to understand better the weaknesses within.  The ego thinks it eradicates its ugliness by making someone uglier or even worse, responsible for your ugliness.  It's not true.  The more we stand and point out everyone else's flaws, the more we reinforce our own.  Its a terrible game but awareness can eventually set you free.

So, how is illusion tied up in this - well, it is the illusion of ego that makes us think we are made greater or better by pointing out someone else's shame and also that our ugliness is eradicated by blaming another for it.  It is the illusion of the ego that thinks blaming others for pain is the way to escape it.  No, no and no.  It makes it worse - it reinforces the pain..it reinforces the weakness the moment we engage in blame, or meting out guilt and shame to those around us or to those we think did not give us what we wanted.  Understanding, compassion and personal understanding is the only way to shatter the illusions we hold.  One key - We are responsible for our emotions.  No one on this earth has the power to make us feel anything.  If you do not seek to understand this one definitive truth, you will be trapped in situation after situation that will force you to eventually see the truth or nut yourself up in so much pain that you'll never get out.  Harsh message, I know.  Tough lesson?  Yeah, I know that too.  But, once you learn this one, you set yourself free, you stop spilling your personal power about you and you stand firmly and steadily within your own light.  The truth shall set you free indeed.  So, any way, I think I've beaten this thought to death lately and so I shall let it go.  I need to refocus my own energy on getting through this darned flu bug.  Sleep, lots of chicken soup and tender self-care is in order.  Be kind to yourselves and to your brothers and sisters today.  Never mind being right so much.  Just find a way to be happy.  Blessings beautiful dreamers.