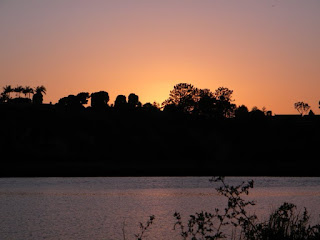 Seemingly unsettled somewhere deep in my bones, I cannot help but wish for a greater space of silence and stillness to just be.  Unfortunately, it seems this deeper desire competes with an unconscious one to become so busy, there is no time to think or just be.  Reality speaks in busied tones these days with too much to do and not near enough time to do it in.  Couple this with some unreasonable and unseasonable bouts of pain related to repetitive motion injury and gosh, life has become a bit challenging of late.  Were it not for the ability to slip into mindfulness and watch the play accepting and yet disconnected from the reactionary urges, I’d probably be quite mad about now.

The sky only begins to lighten the tiniest bit and my coffee sends up tiny swirls of steam into the cool coming in from my open window.  I used to want to figure everything out.  I’ve spent hours and hours in contemplation, writing as I go for some strange reason.  May it is that I have this hope that others who stumble upon my words will either know they are not alone in their noticings while they live or maybe I’ll run across someone who has already figured out what calls from seemingly, the center of my soul.  If I stop that thought I habitually think right there and ask myself to explain, I wonder what might come through.  So, let’s give it a whirl and see what happens.

So, my soul, most trusted essence of everything that makes me, me, what is it with this dichotomy of feeling both stasis and a continuing curiosity to figure things out?  What have you got to say or, maybe, what is it that you seek in this moment?

There is nothing that I seek for I only witness the goings on of this world connected and then disconnected simultaneously. This is no thing that I need – no thing that I want, I just am.  The dissatisfaction you feel is connected to regret, this sense of wasted time which is a very skewed perception of what you think it is that you see, have seen and will see but none of that truly means anything more than your meandering mind desiring to flex it’s muscle so-to-speak.  Let the mind roam, it will do no harm and through it, if you pay close attention to the feelings the process brings you, you may become aware of the things at your core – namely experiences and your judgmental perceptions of the experiencer that will call to your attention.  Within that attention you embody the whole and all of its component parts.  You can analyze with clarity each of the parts but you will be unable to calculate them into the whole.  A drop in the ocean cannot adequately define the whole of the ocean as it hasn’t the ability to see past itself in a see of same creation.

You can let your mind roam over the memories and years and concern yourself with your perception of time or you can move through it without such care except for that you most wish to focus upon.  We have no needs but to understand satisfaction, harmony, alignment; imperfect perfection.  The seeming dichotomies you face are not divisive but rather parts of a clock that perhaps move in different directions and yet the whole of the thing keeps perfect time.  No intervention is needed unless the clock that is your dream or life is the kind that needs winding or a battery.  Maybe you merely are in need of recharging and that is actually the center core issue that is your impetus for curiosity at this time.  Sometimes life is very simple and you merely over-think it.

So, now, slipping back into my normal thought process reigning in the mind to view what I’ve just written seems to make sense to me.  I understand and an automatic deep breath comes in and out freely as I read my way through sentences written without specific thought or direction.  The sky lights more and now the trees outside have returned in silhouette form to punctuate the darkness with outlines against the faint but expanding light.  The skies are gray yet this morning but the sun rises even if I can’t see.  Some say life is meaningless, others say there is nothing more meaningful than life.  What is it I believe?  I think, in this moment, my belief doesn’t matter.  Whether I dispute it or give it more energy to query, everything will be as it is.  Curiosity or complacency are on the same spectrum as is every other type or category of desire, emotion, even impetus.  I think I found satisfaction in a tiny little moment of freedom gained from letting it all go.  Maybe this series of random thoughts will make more sense as the day progresses.  Maybe they won’t.  Either way, still I breathe and still I hope and still I live.

Space in a Moment 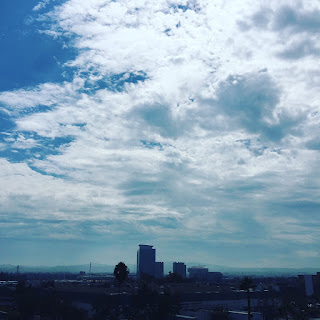 I went for a walk to let my mind take a break from work concerns and a rather large project I wish was going better.  I noticed immediately the rich blue color painted across the sky. It is just different in the fall, a deeper blue.  The Earth’s position in relation to the sun can create unimaginable beauty across the globe.  My senses stretched further out to feel the warmth of the sun on my skin.  How wonderful it is that our bright burning orb sends beautiful warmth out into space.  Combine that with our global positioning and the resulting motion of the air and Earth related temperatures and we have weather to contend with in various parts.  We don’t think much of the mechanics of it but it is complex and yet so very wonderful.

Our global concerns could be removed from us quite instantly and all we know and all we’ve understood could be rendered meaningless in one tiny shift of the construct and pattern of our universal existence here.  We don’t think about that. In a way, why should we?  Some of us might become quite fearful were we to fully realize how tenuous and fragile life on Earth truly was.  It’s best, I suppose to concern ourselves with keeping up with the Joneses, the Kardashians or whatever else we feel is really important.  No.  I don’t believe that.  Not for a minute although I do greatly respect all life, the Kardashians, the Joneses and all others across this planet.  At times I do wish I could concern myself with only trivial things but in this moment it is those trivial things I most desire to take a break from.  So, I wander on foot and let my mind meander.  Then I notice that the view is different as I arrive at a little thinking spot outside my office.   The skyline – wait, there is a skyline?  Sadly, they’ve cut down all the big and beautiful leafy green trees.  When did that happen? I wonder.

No matter.  They are gone now and I sit here mourning the loss of them.  They were big and beautiful and the city I work in does a really good job at maintaining a really good volume of beautiful trees.  Our life depends on them in so many ways but we take them for granted much until when on a hot sunny afternoon we should find ourselves fortunate to relax into the heat relieving shade of the trees.  My mind reaches out into space again thinking about the heat zone of our beautiful glowing sun.  At night you see the remnants of so many others.  Some of which are no longer even with us and yet their light continues to shine across the light years.  In fact, as we look at a nighttime sky, we’re looking into the past in a way.  The length of time it takes for light to travel to us here on Earth means that light could be long gone and we won’t know it – not yet.  I’m grateful for those big beautiful stars both those here and those gone for the beautiful light, heat and life they have promoted across the whole of space.  Space.  Space.  It’s more than that little bar on the keyboard you know.  Such a beautiful word it is, especially when you’re moving furniture, you need to get out of a crowd or you want to lie on your back at night and gaze upward for a huge drink of epic peace.

So many things my mind seems to long for and yet in the middle of the day I cannot let it fully roam.  If I did, I might not want to return to work and then the paycheck won’t come and my roof will disappear.  This would not be a good thing.  But a break away from the media, the presidential dramas, the hatred of opposition, the ignorance of us versus them and my project.  It doesn’t matter any of it really.  What matters in this moment is this big bright beautiful sun, this delicious blue sky and the sea breeze that flows up from the south about now.  The trees that are left, the green blades of grass covering the rough and uneven ground, and the life teeming everywhere I can conceivably focus my attention – THAT is what matters.  My phone quietly vibrates in my hands with a meeting reminder.  I take a deep breath in and hold it a few seconds longer than normal. I feel the space between my thoughts and try with all my might to mark the memory of it and then I rise to return to that big white building most appropriately signed.  I feel the heat of the sun almost doubled as I walk into a direct reflection of the sun on the ground.  I open the door so grateful for that big project and all the amazing people I’m working with on it.  And I realize I found a space of peace in an otherwise ordinary day.  It is the best kind of day.

Posted by journalofmcc at 7:24 AM No comments: