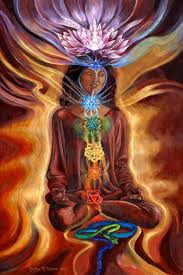 Engaged in quiet meditation was I, enjoying fully the peace and stillness and noticing with amusement that there seemed to be no silence at all.  In growing quiet and turning within I heard sounds that had nothing to do with the outside world and not one single voice was spoken but I felt beautiful words conveyed in tones.  One was so high, like the highest tone of very small wind chimes or even the imaginary singing of angels.  The sound was so pristinely pure and so high it was nearly inaudible.  This sound, so faint, was steady strong as I observed from my spectator position nestled safely within the confines of my own mind.  There too, was a very deep and rich tone that reminded me of the deep sounds of a violin or a cello.  It reminded me of the Earth, so hauntingly beautiful it steadily played on in the silence while I felt it’s tune.  Somewhere in between several more could I hear and feel in that moment.  I realized with delight it was energy I heard.  Out of the various tones I perceived in that moment, I picked one familiar, my own and observed it playing in tune with the sounds of the Earth and the Universe.  In one second of observing the tone changed and took on a strange sense of rising.  It became infinitely vast and resounding with a depth I could not fathom an end to.  Just then, I physically felt a very strong and powerful and yet gentle swirling of the energy at the base of my spine. My sensation of the world rippled and became much less solid with every revolution of the energy as it swirled.  No sooner had I noticed the physical sensation of movement when I felt also the warmth of an internal fire beginning to spark to life at the base of my spine.

I could not move, gripped with curiosity and maintaining an observer position so I would not get in the way of whatever it was that was most definitely transpiring.  The energy began to inch it's way up my spine gently.  The further it moved, the warmer it became.  With that sensation, many more began firing as all of my nerve endings seem to come alive all at once bringing waterfalls of tingles from head to toe.  I sat there still, quiet, eyes closed observing.  The sensation moved to my heart center and exploded in heat like the hottest day of summer and with eyes closed the light inside my mind’s eye glowed bright as the sun in rich gold, tangerine and purple with white, moving and glowing and speaking a language I did not understand.  The energy moved up into my throat and there resided a little while longer and the light in my mind’s eye changed to sage green and blue radiating still more warmth and intensity.  It was becoming harder to breathe from the sheer heat of the moment and the infinite seeming strength of the energy but I sat there calmly willing myself into observance.  The energy moved to my brow and the heat grew even more intense but there it sat and not uncomfortably so at all.  I realized the heat was not the physical heat we typically experience here on Earth somehow. It was different and it did not burn.  A calm peace descended as it moved to the top of my head and a thought came then, “open.”  I felt then the stream of energy running freely and an interconnectedness to everything in existence.  "Pure unadulterated bliss" are the only words I can struggle to define it.

I sat there in the afterglow for minutes that turned to an hour and I found my steady breath once again as the solidity of my physical being seemed to be returning.  This moment, this one moment in time I shall never forget, the love it brought me and left me still feeling.  One week ago it came and has visited me repeatedly since.  A new light and clarity of my vision ensued.  For a very ordinary existence, so very routine, the past 10 days have been so very precious to me.  Something inside me has been burned away and I feel an almost giddy sense of mourning which is so very hard to convey.  Life can change so quickly in seemingly quiet moments.  This moment I shall treasure and each moment that follows even more so.  I love this life and all that it brings.  The design is so much more perfect than we can truly understand until that precious and invaluable moment comes when we do, finally, at last understand and then nothing will ever be the same again.  No, never the same...but, better than ever.