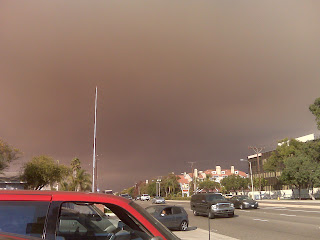 I woke up this morning only slightly disorientated. My first thought was for a certain friend and hopes that he is doing well. My next thought was that I finally felt rested, no heaviness and recalling the plans for the day. Then I remembered California is burning again and not too far away. I went to visit another friend last night and as I was driving in the dark I could see with my bare eyes the glowing orange smoke clouds contrasting brightly in a very dark sky. It was so eerie. I thought back to earlier in the day when I went out for lunch. I was sitting outside relaxing in the sun waiting for my order at Surf City Tacos (yummy place btw) when I noticed a dark looking cloud. The sky near the beach was a beautiful cerulean blue, the air hot with Santa Ana winds blowing. It’s those winds, sadly, that served to fan the flames in several areas damaging at least 100 structures. The sky held a thick dark gray band of smoke blowing out to sea. The Santa Ana winds reverse the wind flow in our area. Usually we have an onshore breeze cool fresh off the ocean. The Santa Ana’s reverse that flow and takes the heat from the California deserts and valleys and blows it out over the Pacific.

It’s sad to me realizing how many people have lost their homes, evacuated to some place safe to do nothing while their lives go up in smoke. The fires yesterday were burning in Brea and Yorba Linda in Orange County. They’ve spread to Anaheim Hills and Chino Hills. I’m eager to learn the fate of co-workers who live in these areas, people that are more than just co-workers…but I can’t call them due to a switch in cell phones and misplacing phone numbers. Frustrating! I pray they are okay. I pray everyone gets out with no injuries. The homes can be replaced. Things can be replaced. Lives cannot and that’s the most important.

I stepped outside this morning and noticed the sky was a bit hazy with smoke. The smell of fire is so strong in the morning air. There is a slight breeze but it’s notably cooler today. I pray the winds are calmer today. I’m praying for rain. If there is any moisture to be had anywhere, God please bring it here to California. The entire state seems at risk for going up in flames. I know its times like these that we are reminded how little we have control over our environment. We’re deluded to think we can control nature once ignited. I pray none of these fires are the work of arsonists. Too many are burning up and down the state to hear yet if investigations in any of them have been concluded.

Aside from all of these distractions, I had a really fun time with a new friend last night. We walked through folk songs of the seventies with a live acoustic guitar and singing. It was fantastic and simple and I’m still smiling at how fun it was. It was absolutely what I needed …to feel good again…and music, wow, that’s been a tough one to deal with lately but my appreciation for music is back. It’s not the pain it was to experience from a few days before. My thoughts are a bit more focused today with the plan for my day. A little domestic work followed by some tennis with another friend this afternoon. I’m grateful. I’ve so wanted to play this weekend but just couldn’t yesterday. I wasn’t up to it. Today will be a good day no matter what happens. Every moment is a precious moment and I’m trying to feel that in earnest.

The thought for the day is to focus on the worries of the world instead of your own concerns but don’t focus in pity. Focus on seeing the best outcome for the situation at hand, happiness for down-trodden people trying to make it through and for an equitable and peaceful resolution. Realize we are all small humans on a big gigantic rock spinning on an axis, spinning in formation around another giant burning rock. In the scheme of things, we are all nothing but souls carrying out our destiny whatever that may be. That’s not to be fatalistic; it’s intended to be both realistic and even a bit optimistic. We may be small in the scheme of existence but the amount of love our souls are capable of are immeasurable. May your day be filled with peace, with safety, with love and light.
Posted by journalofmcc at 6:47 AM