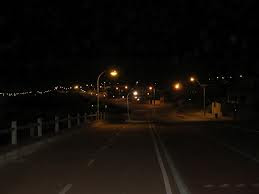 A dark and rarely traveled road I craved last night after I dropped my daughter off at work.  Being in the same town for the better part of the last twenty years, you get to know the roads less traveled and I was craving both solitude and motion.  So, I went for a drive after the sun was well set.  On a Saturday night, not many folks were out in my neck of the woods and the darkness was broken up occasionally only by red tail lights or bright white beams as I meandered through the back roads headed towards the coast.  It was chilly out but the crisp air was perfect and peaceful at the same time for some reason.  Against the dark sky, I could see storm clouds moving in and all I could think was how perfect that was because the sky would be even darker and lights anywhere would be a beautiful contrast.  On one part of my mini journey, I chanced upon a small hill and pulled over just to watch the city lights twinkling in the darkness.  I couldn’t see the stars so the streetlights were going to have to suffice.  As I was pulled over on the side of the road, I let my consciousness expand and I could feel the energy, the holes in the energy where no electronics were buzzing and I could feel the hum of my city.  I observed without impression other than just feeling the energy.  When I had had my fill, I pulled in all of the loving energy from the universe I could muster and I sent it out in gentle slow moving waves, started my car with a silent smile and continued to the coast.

The road I was on dead ended into Coast Highway.  The lights grew much brighter there and a quick look to the right and down another small hill, I could see cars in the distance, their head lights creating a kind of light wave as they seemed to move slowly in my direction.  They weren’t, 65 mph is not slow by any stretch but from a distance it held it’s own beauty.  When I looked straight ahead, there were no lights except for those shining from about 3 scattered oil rigs, one fairly close, the rest off in the distance.  How strange it would be to be on one looking at the lights on the shore of the land.  My light turned green and I meandered along the coast.  Although I looked, I just couldn’t see the waves because it was so very dark out but I could feel them.  The coast holds a certain kind of energy that fills a soul like mine.  Perhaps its just the negative ions that are more abundant in and around water that makes me feel so or maybe, there really is an ethereal power generated by the undulating waves that ultimately crash upon the shore and then gently retreat only to be recreated over and over again.  I think we humans are a bit like that, we swell, crash and retreat in all of our various relational interactions over and over again.  I observed the thoughts but attached nothing to them…no memories, no desires and just let the thoughts be as they wished to be.

After about 10 minutes, I reached the street that would take me back home.   I bid my farewell to the silent darkness and beautifully energetic waves and turned the radio back up and sang myself home.  I was at peace from my simple journey and grateful to be returning to my little home.  There is a great beauty in the simple things in life and sometimes we just need whatever it is that might fill our spirits with something meaningful with a longer lasting energetic affect.  Both driving and the ocean are that for me for whatever reason.  I find great peace sometimes among chaos.  There is always an eye of any storm and in the midst of my locale, the ocean is that space and place of peace and serenity.  I sincerely hope that you all find that one thing or collective of things that brings you long-lasting peace, recharging sensations from an energy perspective and that you endeavor to do them as a special treat to yourselves for making your way through life on planet Earth.  It’s no easy thing, you know and the best rewards are those that leave indelible traces in feelings in your soul. ~Blessings for a beautiful journey.

Posted by journalofmcc at 7:54 AM