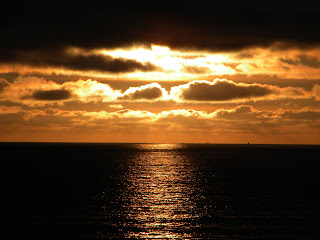 Two years ago about this time, I was suffering one of the most traumatic times of my life. It dawned on me just how sick one of my family members was and how much I was way in over my head trying to care for her and at the same time realizing my marriage was going to fall apart. It was a very sad time. The thing that strikes me the most is that from my perspective, my behavior was about carefully setting boundaries designed only to protect myself. I made no offensive moves or statements to these two individuals closest to me, I just withdrew myself. I had already turned every cheek I had and they wanted more than I could give, they wanted me to be something other than I was and so I gave up in defeat and let go.

In matters of the heart, whether family or romantic, there are those who are unable to accept any form of rejection even when handled gently, even when methodically considered in order to make every effort to save everyone’s feelings, the act of protecting yourself from seeming insanity can bring more if the other parties are not on mentally or emotionally stable ground. I listened much without saying too much about the words of hatred and vengeance thrown in my face. I was so sad for hurting these two people. I really was and I said so but I had already turned every cheek and could no longer withstand what I felt in my gut as pure torment designed by two very wounded people.


Dealing with one individual in such a state is bad enough but two really required a lot of thought. I spaced the hard boundaries far apart to handle them one at a time. I could not deal with pushing two unhealthy fronts out of my sphere at the same time. I had nightmares for weeks from the post-traumatic stress responses I developed in defense. I learned then that if you love others to the point you are heavily wounding yourself, you are doing something wrong and you’ve got to step back and protect yourself.

Two years have gone by nearly on both attempts at boundary setting and I have to say, my life has been so peaceful. Without two dominating, controlling and demanding people in my mix, I was free. I was free from verbal abuse, I was free from manipulation and I really began to see that despite what these two repeatedly blurted out at me, the sky IS IN FACT BLUE and the grass IS IN FACT GREEN. It was a good lesson to learn and I’m grateful for having gone through it. These two individuals taught me so much and lessons are always good things. In time I began to forgive them both and many months after that, I forgave myself for allowing them to hurt me and for hurting hurt people. I hated adding to their pain but I just was unwilling to be a human sacrifice in the name of love for two people who should have respected the sacred positions they held but they were unable. In many ways, its not entirely their fault.

It’s on my mind tonight because in the last 30 days, both have attempted to re-enter my sphere. Immediately the post-traumatic stress response of fear and anxiety hit me hard. Thank God they didn’t show up in the same week and that the protections I put in place, kept direct contact from happening. But the stress response alarmed me. Even as I sit here tonight, I’m pensive, tense and feeling a little fearful. I still harbor guilt although I did nothing wrong. That’s my problem, my cross to bear and somehow I will resolve it. Perhaps I need to forgive a little more or work on letting go of the fear. I think I’ve moved my buttons enough that they cannot push them…but that’s just me. Unfortunately, both know that they can get to me through my children. I won’t fiercely fight if it is just me. I will stand down and let them think, say or do what they will. I know their actions and opinions along with harmful words are really about them, their own unhealed pain they refuse to attend to and ruthlessly inflict upon not only me but others who love them. But, they now come through my children. I cannot stand down. My children cannot protect themselves. I see this for what it is but that fierce mother instinct rises and prepares for battle if yet more wars must be waged with these two. So far, one has gone back into the shadows and my hope above hope is he finds his way to whole-hearted healing. I wish nothing but his happiness, health and prosperity. The other, is another matter and she will fight to the death to destroy my soul. It will not happen but the fact that she tries still hurts. It hurts even though at my core I know it isn’t about me. I cannot worry about this because worry will not impact any outcome she intends to implement. All I can do is pray for her healing, pray that I can protect my children from her negative influence and pray that maybe she isn’t out to engage in battle but maybe, just maybe make amends.

Two years ago, a judge awarded a restraining order because of this woman’s attempts to cause harm. It’s really very sad and still I pray. I can’t do much about this other than keep focused on my progress, keep love in my heart for this woman who once held the most sacred place in my life. We don’t get to choose our birth families I’ve heard. I’m not sure that’s true. I believe my mother and I (if you didn’t know the story) have been in this place repeatedly throughout our many lives. I wish this struggle between us to end, here, in this life time. I wish the pain and conflict between us to end. The sad part is, the only way to resolve from her perspective is submission to emotional abuse again on my part. I cannot. So, still it’s out of my hands…thus my struggle, my anxiety and my fear. I’m weary of this drama. I love her so much and yet she cannot be in my life until she heals herself and gets herself some help. I fear it will not happen and I’m too tired to continue to do this with her again.

So, when I’m not underneath the stars watching the sky, letting it remind me of how NOT important this little drama is in the scheme of the whole of my life, or the planet, or existence…I am so very human, so very fallible and I struggle to understand this lesson. It seems so pointless but bear in mind I do not believe there is a villain or victim in this situation. There is merely conflict in emotions and actions that seem utterly unresolveable and I’m either incredibly brave or really stupid for writing about it. My hope in writing about this is to let others out there in similar situations know that they are not alone in their conflict, their turmoil or their pain. We all go through this in some way. Some of us handle it well and some not at all. Me, I go either way depending on the day with this one. One thing is clear in my mind right now…feeling brave having 2 years from this conflict under my belt…my intent is to do no harm in this situation. My intent is to pray hard for some form of compromise if there is one to be had. My intent is for healing to set in and heal wounded hearts. I know that my Maker would not give me more than I could handle and that I will be given the grace to face whatever I must in this situation. So, I’ll go on and face it as it rises to the surface or comes to the fore of my existence and I will do my best to play my role as best I can and make sure my heart and soul stays intact.

Family challenges can be so damaging but only when you continue to allow the ego to take it personally. Not everything is about you even if it feels like it is. This I have learned. The only thing that can resolve this conflict is for love to enter the hearts on both sides and stop the ego drama for control to be right at the expense of another. I have not been right in this conflict. I admitted defeat and walked away. It was the only thing I knew how to do. But maybe it is time to face it head on one more time. Everything happens for a reason. We’ll just see what this resurfacing is all about. My feelings are not facts and I refuse to give into my own fearful assumptions. I think at times I work things out as I write it. Forgive me my vent then dear sweet souls if you’ve read this far. Something good may yet come of this situation and even though I can’t see it and I don’t know how the good will come, I just trust that it will. I pray that’s enough. If you face similar challenges with your own family or other loved ones, I challenge you to do no harm. Do not extract vengeance in any form for harm done to you. Step outside of the madness and refuse to engage until you are calm, centered and feeling good. Then address if you must or choose to go down a different path that leads you away from the individuals you are in conflict with. Just remember that the only person you can control is you. The only actions you should attempt to manipulate are your own. Remember the serenity prayer and do your best to hold a loving space for people to be who they are. Turn all four cheeks if you have to and then love yourself enough to set loving boundaries to protect you. It is your right. My prayers are with all of you in times of conflict always. I know that in some way love in its purest form will free you from your torment if you allow it to. ~Blessings
Posted by journalofmcc at 8:32 PM