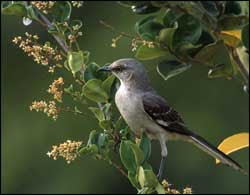 Nearly fifteen years have gone by since my dad died on September 14, 1993. Yesterday would have been his 63rd birthday. He died way too young and he didn’t die easy. Alcohol helped him make his transition and it was not a good transition. This time of year I always feel a little uneasy but near this time every year since he passed away I have busied myself with trivial things so I wouldn’t have to feel the pain. This year, I was not busy on his birthday. This year, on purpose, I cleared my mind and heart and planned to go visit his grave and pay my respects.

Let me back up a year and tell you a story. It’s relevant to this one as soon you will see. It’s a bit of fantasy but it brightened my day and I wanted to share it. It brings a little joy back to a heavy heart. A year ago, I helped get my alcoholic mother out of a bad situation several states away from me. It was a huge effort and a costly one from many perspectives. Just before the rescue journey began, a mocking bird showed up at my door. He was there every morning at 5:00 a.m. chirping wildly and loudly in my back yard. I thought it was odd after several days but loved the sound of his chirping and laughed at his antics as he’d fly high up into the air and then dive down to the top of the telephone pole, look at me and chirp some more. If I went to the front yard, he'd follow me. If I went to my bedroom, he would alight on the tree outside my window.

Mocking birds were a fascination of my father’s. I can’t tell you how many times we sat in the back yard or the front yard at home counting the various calls of the mocking bird. We watched intently as they would chase off the crows and blue jays from the bread crumbs we’d leave for them. My dad loved all birds but really loved the mocking bird. When my little friend joined me last year, I wondered if it could be a message from my dad, just letting me know he was around. Even when we finally got my mom to my house, she noticed it and said that I needed to pay attention because that little bird had a message for me. After 30 days of turmoil with an angry alcoholic with borderline tendencies, I had to ask my mom to leave…rehab or homelessness were her options and she chose homelessness. My little mocking bird friend left me the day after she did and didn’t return.

We moved to a new place where my mom couldn’t keep her barrage of emotional attacks on me. She had become quite angry with me for refusing her continued rescue and I just didn’t know what else to do. So, the new place was quiet and close to the beach. But, my marriage quickly ended up on the rocks. My ex-husband started engaging in tactics very similar to my mom’s to the point that I just couldn’t take the emotional abuse. As I contemplated divorce, my little friend returned. He’d chirp from 1:00 a.m. until I left for work. Every night he was there until I finalized my decision and then he left me. I wondered again if that was a message from my dad just letting me know he was there, a tough time was coming but not to worry…he’s with me.

I’ve not seen the mocking bird in a long time. We moved again some place the ex couldn’t find us and have been busy rebuilding our lives. We’re doing well and life is peaceful finally at long last. Maybe it’s because of that peace that I wanted to go pay my respects to my father on his birthday. I know his grave no longer holds him. His spirit is free just like the birds he loved to watch and appreciated so much. It was a somber drive to the cemetery with my two youngest girls in tow. My eyes started to sting when we got close to the cemetery. I wondered at that…it’s been 15 years since he died, why is it so painful this time…but I remembered that I had created such peace in my life that I actually had time to think and feel and just kept driving. I put on some sunglasses so my little one’s wouldn’t worry if they saw my tears. We brought red carnations to put on his grave. Red is my favorite color and my dad was one of my best friends. The girls and I located his grave and right off the bat just above his name on the plaque were 3 feathers. They were clearly mocking bird feathers. My youngest grabbed the biggest one and handed it to me. She said, “this one is for you.” I smiled at her but the tears were stinging in my eyes again and then I knew the mocking bird that had been with me was no fantasy, no wishful thoughts but real. My dad was with me in times of trouble, is with me still today. That is such an amazing thought. The logical side of me thinks those thoughts are crazy but the part of my heart that misses him so much believes in the faery tale I created about the mocking bird. It comforts me and when I saw the little feathers, carefully stored by my girl’s on the kitchen counter in a little blue bucket, I realized that they too finally got to meet their grandfather but in a different way. That, to me, is priceless. I’m now smiling despite having a bit of a heavy heart!
Posted by journalofmcc at 6:12 AM