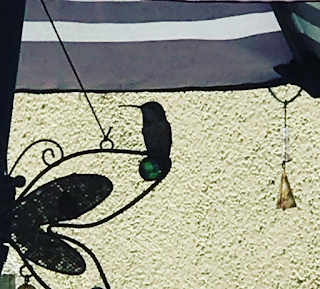 I had occasion to watch a humming bird building a nest.  Every day, piece by piece, she created the nest.  It was perfectly protected in of all places, a huge thorny rose bush outside in my back garden.  Every day Ms. Humming bird flitted in, wings beating wildly, to add one tiny little piece of string, of fluff or a twig.  Then one day, she stopped building and then left a tiny little bluish white egg.  A day or so later, she added another.  Not so much flitting did she do after that.  You could frequently find her sitting on her nest wondering about how close you were going to get before she flitted off to safety.

I kept my distance and just observed the progress.  After what seemed like a few weeks, I saw something white on the outside of the nest.  It was a tiny little egg fragment.  Inside were suddenly 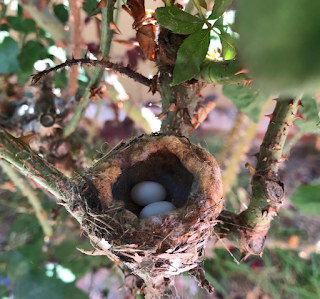 Those days seemed like they went on for years with the babies getting bigger and bigger still.  One day, I noticed that the babies barely fit inside the nest.  Soon, they would begin to heed the call for flight.  I was so excited hoping I'd catch a glimpse of their flight.  I came home from work one day and one of the little babies was in fact outside the nest but sadly, she had fallen chest first into a very large thorn just above the nest.  The other baby was out and hiding somewhere else in the rose bush safely.  I continued to watch while keeping my distance. 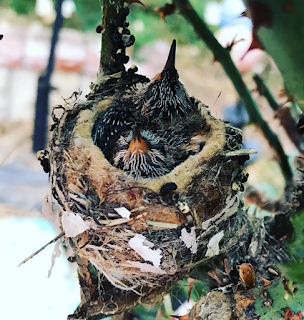 The next morning as I was loading my car up for work, I noticed that the remaining baby bird (I called her Tweety, the other was Sweet Pea) had flown into the garage and sat shivering on the little rug in front of my dryer.  I was concerned about her but she seemed very healthy and I thought it best to let nature takes its course.  I knew she'd figure out how to fly out whether I worried about her or not.  When I came home from work that night, the little baby bird was no longer in the garage.  I couldn't see her anywhere.  For a day or two, she kept herself hidden.  Then, finally, I saw her perched on the line between the garage and my house that holds up a small awning.  She was so big that I worried she'd never be able to get her little wings to give her any lift.  She'd fly about for a little bit but she stayed right where she was most of the time.  Mama bird would flit in, feed her and then zoom off again.  Another mama humming bird with a baby came by and perched right next to her.  Tweety just watched them as they landed, took off, flew around her and then sped off.

For days Tweety just sat on that line holding on seemingly fearful of flight.  Mama kept feeding her and she stayed a big very healthy oversized humming bird for about a week.  Then, mama stopped feeding her.  Tweety stayed perched on the line,  only occasionally flying an inch or two as the wind made holding the line a little more difficult.  I noticed without mama feeding her she was growing thinner.   One day as I was walking to the garage, I noticed that Tweety was quite thin, very much less baby sparrow looking and much more humming bird looking. 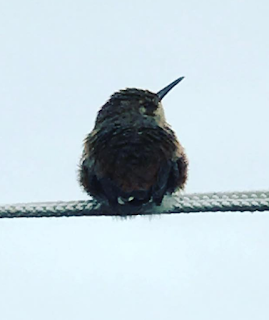 When I came home from work, she was gone.  It's been a week now and I've not seen her sit perched on the line.  I've not seen mama bird or any other humming bird perched on my patio.  I see and hear them as they whiz by though.  I was a little sad at the thought of Tweety leaving the nest but I was glad though too.  She made it.  She's off on her little nature-ific adventure.  With her gone, we finally removed the dead baby bird and I felt sad for that too.  But life is funny like that.  Mama humming bird laid two eggs and one lived on to expand the humming bird population.  I said a prayer of gratitude and took, for myself, a little lesson in life.  If you're a parent, you'll get it too.  If you stop feeding them, they'll seek to fly in search of food and shelter.  It is what they are called to do.  And after that, the only nest you'll need is one for yourself and you'll continue on as nature calls you to do.

Posted by journalofmcc at 9:41 AM